For 15 years, 53-year-old Shi Xianghe has been riding his e-bike to deliver meals to senior residents in the rain and snow, scorching sun and bitter cold. The COVID-19 pandemic hasn’t slowed him down. He doesn’t know how many seniors he has served, because there have been so many and quite a few have passed away.

Shi, who joined the Communist Party of China in 1991, often works 365 days a year. Now he delivers food in the Caohejing area in Xuhui District.

A native of Qufu in eastern China’s Shandong Province, Shi arrived in Shanghai in 1989 and served in the army. After four years, he retired from the army and worked at a police station, patrolling the streets at night.

Fifteen years ago, he started delivering milk and meals for Bright Dairy.

Shi’s schedule has been quite routine. He wakes up at 3am every day and delivers milk to 80 households until 7am. At 9:30am, he arrives at Shanghai Leyuan Retirement Home, picks up lunchboxes from its canteen and puts them inside an incubator, and delivers them to 18 seniors’ homes one by one regardless of heat, rain or snow.

He finishes at 1pm. 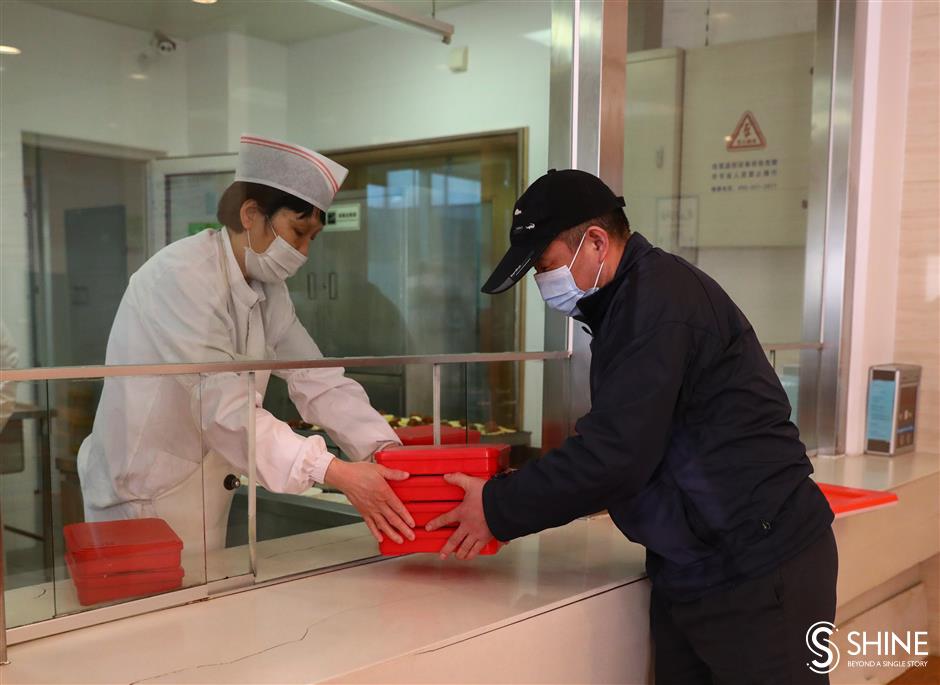 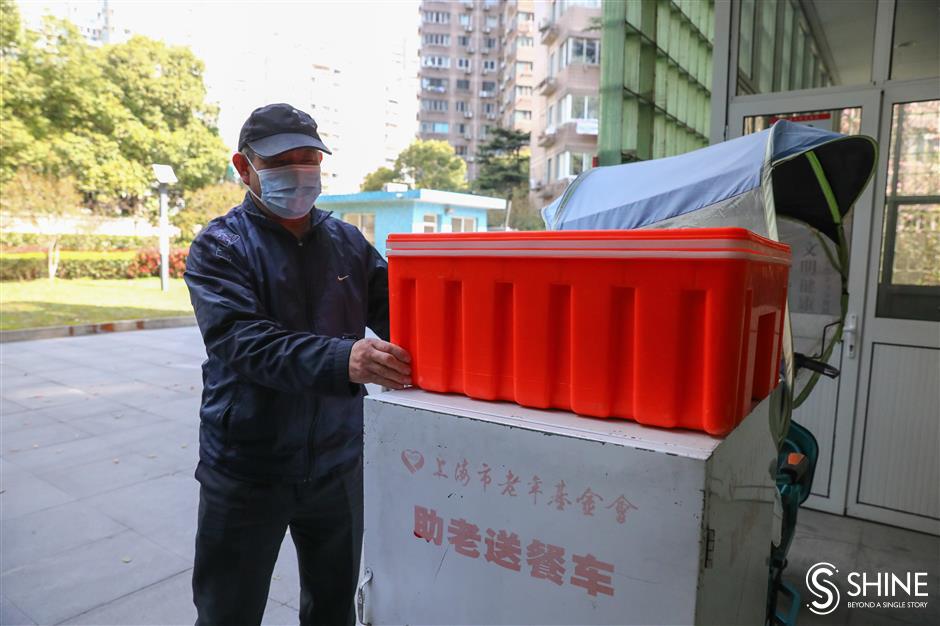 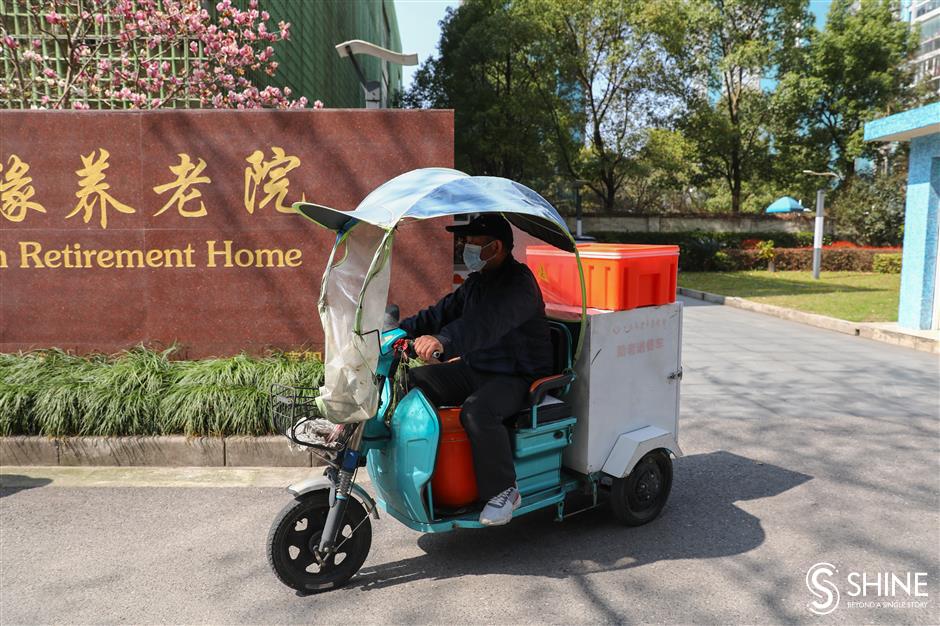 No matter good weather or bad, Shi rides his e-bike to deliver meals to the senior citizens in Caohejing area.

At 6pm, he arrives at the milk storage station and gets the milk he needs to deliver the next day, which usually takes an hour.

The time he arrives at each senior’s home is fixed regardless of the weather, and he seldom arrives late or early.

Shi’s 78-year-old mother lives alone in his hometown, and he has returned only a few times over the past 15 years; the last time was three years ago.

“My job requires me to be on duty all year round, and these seniors are in my heart even if I return home,” he said.

The seniors receiving meal deliveries are mostly in their 80s, and the oldest is over 90. Two are blind. The oldest person Shi served passed away at the age of 101.

The buildings where these seniors live do not have elevators, which means Shi usually has to climb five or six flights of stairs.

“Every day is the same for me regardless of weather, because it’s my duty to ensure they receive meals on time,” he said. “Some will wait at the doorway ahead of time, and some will feel uncomfortable, fidgety or even concerned if they miss their meal time.

“It is a race against time and I need to ensure the food is still warm when they receive it, even in winter,” he added.

There have been unexpected situations, such as when his e-bike breaks down. He travels with a spare tire, and has mastered the skill of changing tires. “In such cases, I ride as quickly as I can to make up for lost time,” he said.

Rain and wind are the most challenging condition for him.

“Very hot and very cold weather isn’t an issue, but wind and rain are really difficult,” he said. “The roads are slippery and the raincoat affects my view, which slows down my pace.”

Last December when snow hit the city, Shi arrived at the canteen one hour earlier than usual to ensure his deliveries wouldn’t be delayed. “The job requires patience,” he said.

Some seniors can’t hear the sound even after knocks several times, so he has to wait.

Shi is clear on every senior’s characteristics and preferences.

“Some eat more and I prepare more rice for them. Some don’t eat shrimp or fish, and I tell the canteen to replace these with vegetables or other food,” Shi said. “They are like my own parents.”

They look lonely, he said. Some are in poor health, and it’s difficult for some to stand up. 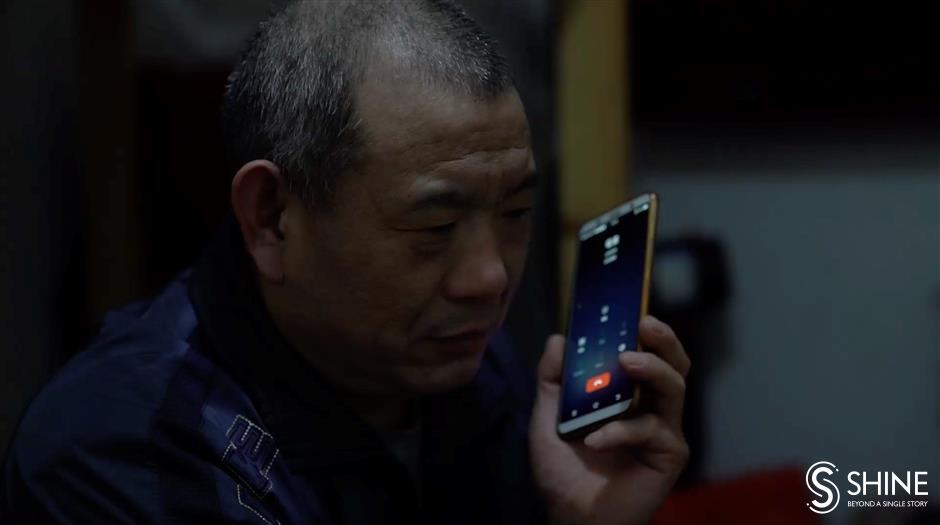 Shi would contact seniors’ families or neighborhood committees if their doors are not answered.

The job is more than it appears. Death is an unavoidable topic.

Once, the door of a disabled senior was not answered when Shi arrived, so he called the woman’s daughter immediately. The old woman had slipped at night while using the toilet and was unable to stand again. She was hospitalized and died several days later.

Sometimes, seniors have chatted with Shi and looked well, but the next day he found out they suddenly passed away.

He wiped tears several times during the interview.

“They are older than my mother, and I have delivered meals to them for many years,” he said. “We are like families. I am very sad when they passed away, and I think of my own mom who is alone at home.”

Shi said his younger brother is a migrant worker and also doesn’t live in their hometown.

“My mother understands my job, but she also eagerly yearns for my return,” he said.

Shi said he once took her to Shanghai, but she couldn’t adjust to life here and would rather stay in their hometown. “I feel sorry for her,” he said.

Shi has missed many Spring Festivals back home, but he chats with his mother over the phone as often as possible.

“When I returned home, my colleague delivered meals for me, but seniors I serve often asked when I would be back because they were used to my deliveries,” said Shi.

There are many heart-warming moments.

“Some seniors leave delicious food for me, such as a piece of cake when it’s their birthdays, which warms my heart,” he said. “When the weather is bad, they remind me to be careful during the trip, and they are quite considerate, saying it’s okay if I’m late in such situations. We care about each other.”

One senior has given Shi the key to her home in case she’s taking a stroll outside when he arrives.

“It is a kind of trust in me,” he said. “The job is very common, but I feel a sense of worth serving these seniors. It’s more than just a job for me.” 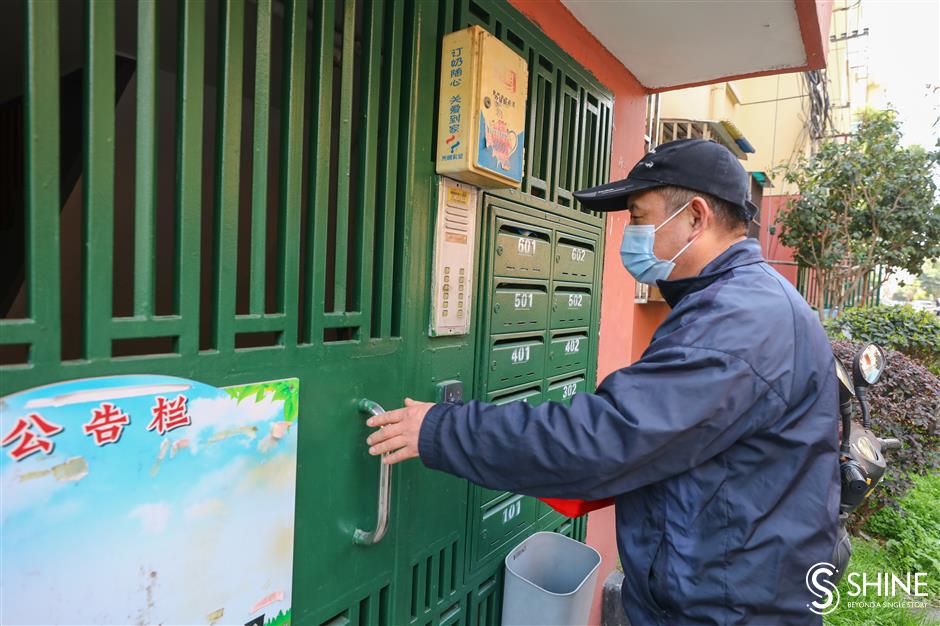 The time he arrives at each senior’s home is fixed regardless of the weather, and he seldom arrives late or early.

Shi wins the hearts of the elderly with his sincerity, loving heart and sense of responsibility. For example, on March 15, Grandpa Zhang, 78, waited at the door at 11:10am and Shi arrived on time.

“I have been receiving meals from him for seven years, and he is always on time despite the weather,” said Zhang, who is blind. “In chilly winter, he uses his coat to wrap the meal boxes while climbing stairs, and runs up the stairs to ensure the food is warm.

“When the weather is bad, I worry about his safety and ask whether he has a raincoat,” he added. “Shi often asks for my feedback on the food, and he is very careful and responsible.”

Grandma Yang, 88, stumbles to open the door. Due to several falls, she can’t walk fast and suffers from leg cramps.

“I am very grateful for Shi’s service,” said Yang.

She started receiving meals from him eight years ago.

“The food is always warm when I receive it, because he walks very fast,” said Yang.

She often gives Shi food such as fruit.

“He’s like my own son, and I worry about him in bad weather because he’s a very good person,” she said.

“It is my wish that these seniors have a good meal and enjoy longevity,” Shi said alongside Yang.

There are several hundred seniors living in the area, but due to limited capacity, the service can only cover those who are 80 and above, live alone or have financial or living difficulties, he said.

A meal with two meat or fish dishes and two vegetable dishes costs about 10 yuan (US$1.53).

“These delivery workers not only deliver meals, but also observe the situations of the elderly who live alone,” said Bao. “They handle emergency situations in case seniors are sick, and also do a lot of other things such as disposing of garbage for them.”

“Shi is a model CPC member, and sets a good example for other delivery workers,” he added. “He is not special, but he has been wholeheartedly dedicated to the common post for such a long time. He wins the respect of all, and he and these seniors are like family members.”