Keystone Villa at Douglassville residents presented a check for over $2,500 to Executive Director and Chief Anthony Tucci and Assistant Chief Carrie Frey of Western Berks Ambulance Association on Wednesday, June 2.

“We are very grateful for all your generosity and support to Western Berks Ambulance; thank you!” Frey said to a group of residents seated inside the dining room at Keystone Villa.

The retirement community located in Amity Township organized and held an outdoor fundraiser on its grounds in late May that featured a car show, craft vendors, food trucks, live entertainment, and raffles. Proceeds from the event supported the association in rebuilding its headquarters in West Lawn.

Residents and staff have decided that this fundraiser will become an annual event for the association as a way for the community to show their continued support of its first responders.

Executive Director and Chief Anthony Tucci and Assistant Chief Carrie Frey of Western Berks Ambulance Association hold a check presented by residents and staff at Keystone Villa at Douglassville. The money was raised during an outdoor fundraiser in late May, which residents and staff have decided to make an annual event to benefit the association. (Photo courtesy of Keystone Villa at Douglassville)

“Keystone Villa’s staff and residents greatly appreciate all that Western Berks Ambulance does for the community and us. We’re hoping next year’s event will be just as successful and more—so stay tuned!” Tina Hess, marketing director for independent living, said.

In February, the association experienced a devastating ambulance fire inside its headquarters in West Lawn. The two-alarm fire destroyed the medically equipped vehicle and damaged vital equipment and supplies, including a support vehicle and another ambulance, and rendered the station uninhabitable.

The association continues to provide 24-hour EMS coverage, and its building is in the process of being remediated.

Keystone Villa at Douglassville offers spacious studios, one-bedroom, or two-bedroom apartments designed to suit your style. There are no buy-in fees or hidden costs, and the apartments are leased on an affordable month-to-month basis. To learn more, visit www.keystonevillaatdouglassville.com. 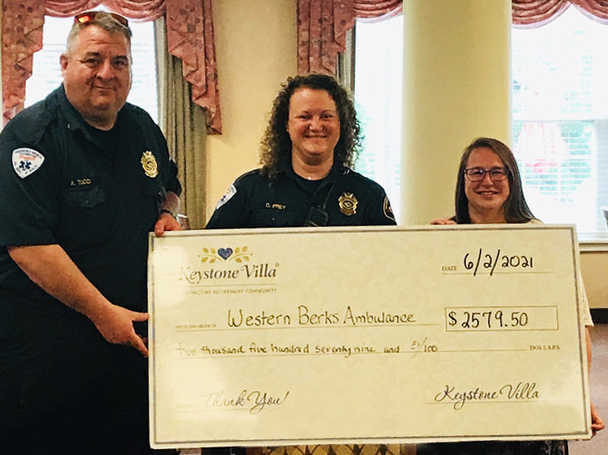