August, 2021 –  Arkansas, Mississippi, Tennessee – Got an early start Monday to make it 78 miles from Helena, AR to Memphis, TN, and a decent bike shop.

I swapped out my front tire before I left and figured, in typical thrifty/Steffes fashion, I could roll a couple more miles out of the rear.

After pedaling Louisiana and Arkansas and rough timber-logging roads, it definitely needed to be replaced. I had worn 7 long gashes into the rubber and Memphis was the closest true bike store.

But Memphis came with a lot of safety warnings, especially for a girl on a bike.  I started out with a dread, cautious optimism, and definitely some red flags warning me I was making a bad decision.

Fonzi was my first bright spot on the day. He offered to take my photo for the Arkansas postcard.

His reaction was cute when he realized I was making my way back to Wisconsin.

”Gotta do it. Gotta live your life, Miss Judy,” said Fonzi. “Be careful. Be careful, Judy. You’re going in the right direction.” 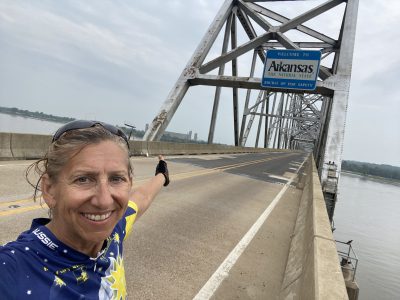 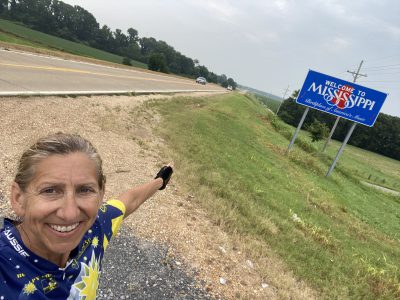 …the roads got even worse. For a car they were fine but there was absolutely no shoulder and with 55 mph traffic that spelled doom for bikers.

I opted for a Plan B … and within 5 miles ran into this warning. 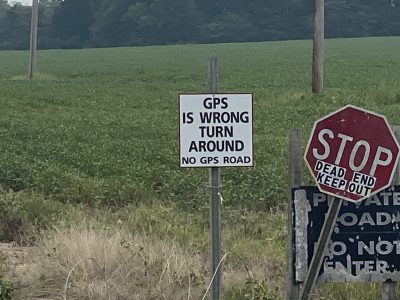 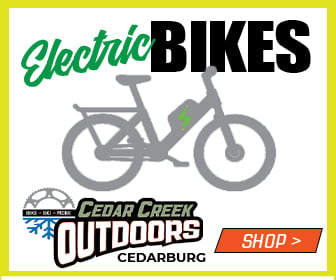 Could that series of signs cast any more blatant warning to 1) turn around and 2) you’re seriously going the wrong way?

Aside from vowing to frame this photo when I got home, I pressed on, and when I felt lost and a little scared on the lonely road along came Jimmy Boyd who waved me in when I asked for water.

Jimmy, 88, filled up my water bottles from the hose in his yard. When you are in these circumstances hose water is the best water… 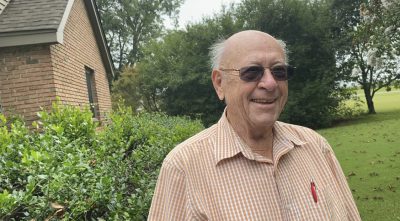 A retired cotton and soybean farmer. He went into the military and when he came out, returned to farming.

Jimmy was a John Deere man; he had farmed 3,000 acres. Jimmy lost his wife to cancer on Christmas Day about 15 years ago.

“Been by myself ever since,” he said. “You don’t get over it… You just have to learn to live with it.”

Jimmy was a peach and then he said, “You be careful there in Memphis. I even hate to drive there…”

I was about 25 miles out of Memphis and pedaling north on the old Hwy 61.  I had the road to myself lined with cotton fields and soybeans and noisy generators pumping water through the irrigation systems. 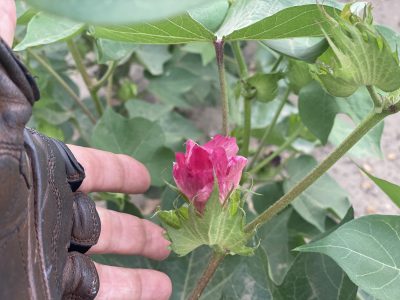 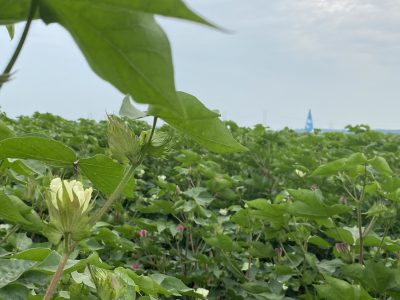 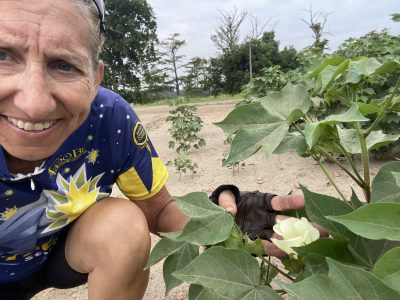 Ran into Mike outside of Tunica, Mississippi and he gave me the oldest license plate he could find. 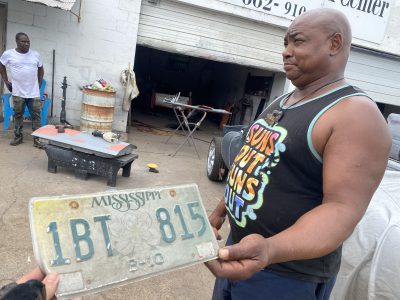 By 3 o’clock in the afternoon, I was still 16 miles out of Memphis. The bike shop closed at 6 p.m. and I was never going to make it.

Worse yet, I was entering what locals said was the worst part of Memphis with high crime and drive-by shootings. Maybe this was TV news talk… but the locals know.

I took a break and, during a procrastination conversation with a bottle of water, in steps Albert. “I’m off work for the day and I’m not going that direction but I’ll take you there because then you’ll get there safe.”

Oh my gosh, I loved Albert. He was a retired trucker who was still hauling. 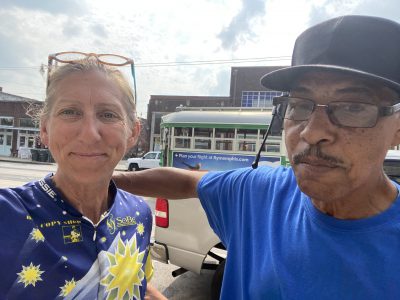 He had three kids. “They’re all grown—and I have three grandkids… they’re grown, too,” he said.

Albert’s wife had died in 2019. “Cancer got her quick… “  Albert had plans to go to Detroit as soon as his daughter got getting married.

As Albert drove through South Memphis I gauged my safety level had I been on the bike. I thought I could have done it but the traffic was swift and I saw nobody else on a bike.

Albert must have been reading my mind. “God put me in your path for a reason…”  And that’s all he said.

The FBI, then called the Bureau of Investigation, became interested in Barrow and his paramour late in December 1932 through a singular bit of evidence. A Ford automobile, which had been stolen in Pawhuska, Oklahoma, was found abandoned near Jackson, Michigan in September of that year. At Pawhuska, it was learned another Ford car had been abandoned there which had been stolen in Illinois. A search of this car revealed it had been occupied by a man and a woman, indicated by abandoned articles therein. In this car was found a prescription bottle, which led special agents to a drug store in Nacogdoches, Texas, where investigation disclosed the woman for whom the prescription had been filled was Clyde Barrow’s aunt.

Further investigation revealed that the woman who obtained the prescription had been visited recently by Clyde Barrow, Bonnie Parker, and Clyde’s brother, L. C. Barrow. It also was learned that these three were driving a Ford car, identified as the one stolen in Illinois. It was further shown that L. C. Barrow had secured the empty prescription bottle from a son of the woman who had originally obtained it.

On May 20, 1933, the United States Commissioner at Dallas, Texas, issued a warrant against Clyde Barrow and Bonnie Parker, charging them with the interstate transportation, from Dallas to Oklahoma, of the automobile stolen in Illinois. The FBI then started its hunt for this elusive pair. (Courtesy: FBI.gov)

Have I not commanded you? …  Be strong and courageous. … Do not be frightened, and do not be dismayed, for the Lord your God is with you wherever you go.”  Joshua 1:9

The 2021 Amazing Ride for Alzheimer’s is raising money this year for music programming for seniors at Cedar Community, a 501c3, so all donations are tax-deductible.

Donate via the secure website through Cedar Community.  Donations should be marked “Amazing Ride 2021.” Click HERE to make a secure online donation.

Checks may be made payable to “Cedar Community Foundation” with “Judy Bike Ride” in the memo line and mailed to 113 Cedar Ridge Dr., West Bend, WI 53095

You may also find a downloadable donation form HERE.

Cedar Community is a 501(c)3 not-for-profit organization, and donations are tax-deductible. 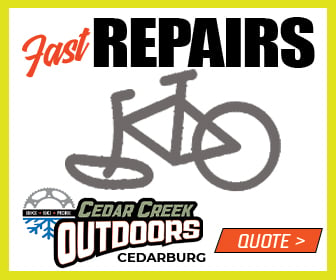